Don't use plagiarized sources. Get Your Custom Essay on
Effects of School Funding on Student Academic Achievement
Just from $13/Page
Order Essay 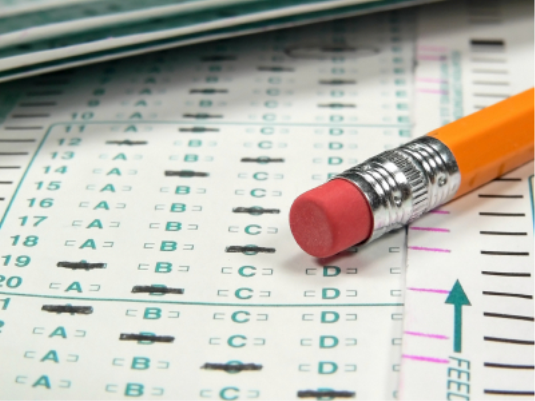 For the past 50 years, SAT scores for high schools across the nation have been steadily falling. Because the SAT is a fairly consistent method of testing the academic aptitude of high-school age children, this trend is concerning. As it stands, by the standards of the College Board, high school academics are preparing students less and less adequately for the rigours of secondary education. This paper seeks to address what policy initiatives can be taken by states to raise these scores.

I hypothesised at the beginning of the study that per capita expenditures on primary and secondary education would have a significant effect on SAT scores. By using multiple data sets: population data from the US Census Bureau, education expenditure results from the Department of Education, a partial data set from STATA, and participation levels by the College Board, I amassed a collection of variables that I considered to be most valuable to determining the relationship between state education policy and SAT scores 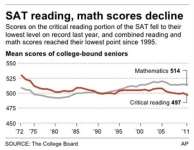 By analysing what I determined to be the most significant factors affecting SAT performance, I concluded that the factor which could most effectively boost SAT scores came on the heels of SAT participation. SAT scores were strongly correlated with participation levels. A greater percentage of high school students taking the exam in each state resulted in a weaker performance. A disproportionately high number of high-scoring participants take the SAT whether or not initiatives are undertaken by state governments or schools to boost participation. Those students typically score higher. The increase in participation of students taking the SAT will come from a portion of the population who otherwise would transition straight to career paths out of high school. Education initiatives typically give these students an opportunity to take the test, and these students typically score lower.

Ultimately, from a policy perspective, the best way to boost scores is to ready the portion of students who are being given the opportunity to take the SAT through funding and other education initiatives. It is useless for them to take the exam if all it does is prove that they are not ready for college.

The survey of SAT scores and birth order demonstrated that a negligible fraction of the decline in SAT scores can be explained by changes in family dynamics. In general, SAT scores showed little variation with birth order and family size, which was far less than that which was found in other data sets.

This survey of SAT scores and population distinguished between the separate populations of high school students who took the SAT and those who did not. Suggested that the greatest effect on the SAT-score decline was the regression of academic capabilities of high-school age teenagers. This possibly came from the ‘dumbing-down’ of textbooks

The hypotheses analysed in this study suggested that changes in schools, society, population, and an increase in problems with the tests themselves are the greatest contributors to the decrease in SAT Scores. A list of variables: “The first major category (changes in the schools) is further broken down into hypotheses related to curriculum, institutional policies, teachers, and students. The second major category (changes in society) lists hypotheses related to family, religion, civil rights, crisis of values, national priorities, economic, labor movement in education, and technological changes. (Abstract)”

The primary models I used to determine which two variables that could be affected by state education policy were:

Finally, I developed a model with each of the variables that ultimately seemed most relevant:

Before I ran the regressions, I hypothesised that the main factors affecting SAT performance would be median household and per pupil expenditures for primary and secondary education. I anticipated that states with a higher portion of domestic wealth would score better because there would be more local money going into infrastructure, and assumed that states with higher levels of spending on primary and secondary education would be higher because they reflect a greater education initiative.

For each regression, I focused most specifically on the coefficient, t-statistic, and r-squared result.

Government spending as a whole ultimately does not aid SAT performance. Regardless of whether or not it builds infrastructure, it seems as if funds set aside specifically for primary and secondary education are the most necessary to boost SAT scores. Additionally, I determined that- at least when it comes to SAT scores in high schoolchildren, Wealth does not denote academic success.

As was determined from the methodology of regression 1, the statistical relevance of income and insignificance of government spending led me to reason that income played a greater role in determining SAT scores than government spending.

Further, I questioned if the results for regression 1 had anything to do with causality, because the states that score more poorly on SATs will receive more money from the government to ameliorate educational infrastructure.

Participation was negatively correlated with SAT scores, and significantly so. I reasoned that a base participation rate includes a skewed population of students who intend to go to college regardless of domestic initiatives to send high school students to college before allowing them into the workforce. Therefore, if more students choose to take the SAT, those students will be those who had not necessarily planned their high school education to ready them for the SAT. There scores thus will be lower.

While the results of my first regression clearly suggested that government spending as a whole has little to no effect on SAT scores, I aimed to determine that per pupil expenditures on education for primary and secondary schooling had a strong positive correlation with students’ SAT readiness. This was not the case. Government education expenditures was loosely correlated with SAT scores, but not significantly so. This result could possibly have come from different years of availability for each variable. Many of the variables were derived from an old STATA data set that suited my intents, but I added other variables to develop a more individual project. Government spending was one of these variables, and the data may have been more recent than others.

Further, as was the case with regression 2, the levels of participation played a strong and significant factor in determining the rate at which students would score on the SAT. The t-statistic was highly significant, so I trust that this correlation is true. I expect the population shift that I described in my previous analysis will still stand.

Ultimately, I determined that as much as I had hoped that income and per-pupil education expenditures would have strong effects on the scoring of high schoolers on the SAT, because such effects are easily fixable through initiatives. I was wrong. Expense and income both were determined to be insignificant, with expense ultimately having a negative correlation with SAT scores. This cannot show the whole picture, however. Wealthier states traditionally have stronger educational infrastructures and students who perform better on the SAT. I can only assume that wealthier states are those which have educational initiatives to give more students the chance to take the SATs in the first place, and thus have a pool of lower-scoring students. Conversely, students in states with low median incomes had to have a significant personal initiative to take the Test in the first place. Therefore, the relationship between income and infrastructure is that which renders the relationship negative.

Continue to order Get a quote

Calculate the price of your order

The price is based on these factors:
Academic level
Number of pages
Urgency
Basic features
On-demand options
Paper format

Delivering a high-quality product at a reasonable price is not enough anymore.
That’s why we have developed 5 beneficial guarantees that will make your experience with our service enjoyable, easy, and safe.

You have to be 100% sure of the quality of your product to give a money-back guarantee. This describes us perfectly. Make sure that this guarantee is totally transparent.

Each paper is composed from scratch, according to your instructions. It is then checked by our plagiarism-detection software. There is no gap where plagiarism could squeeze in.

Thanks to our free revisions, there is no way for you to be unsatisfied. We will work on your paper until you are completely happy with the result.

Your email is safe, as we store it according to international data protection rules. Your bank details are secure, as we use only reliable payment systems.

By sending us your money, you buy the service we provide. Check out our terms and conditions if you prefer business talks to be laid out in official language.